Miso with some nuns…

Here’s a picture of Miso with some nuns. Just because. 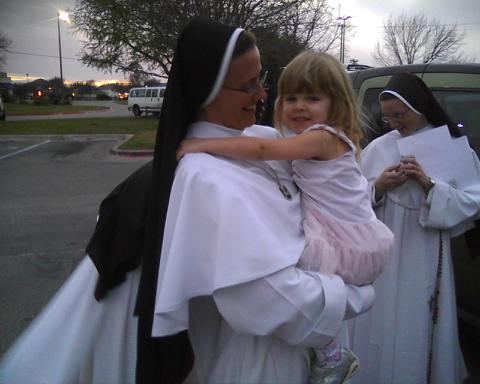 I’m pretty sure these are the same sisters who visited her in the hospital and sang for her.

About a week after Miriam’s VEPTR surgery, we began to hear a sighing sound from her room while she was sleeping. As the weeks have passed, that sound has become more prominent, and her voice has also gotten increasingly raspy during the day. We took her to an ENT today to have her vocal cords checked. She had to have a numbing spray and then a flexible scope inserted in her nose, which she did not enjoy. The doctor saw she has developed a cyst on one side of her vocal cords, probably due to the irritation caused by the respirator tube from the surgery.

This means Miriam is headed for a minor surgery on Monday, March 11, to remove the cyst. The procedure does require general anaesthesia, but should only last 20 – 30 minutes. She should go home the same day. The doctor told us he was surprised to see a cyst, but that it was much easier to treat than some of the other possible complications he was anticipating based on her symptoms. He also said there should be minimal pain after the surgery. Please join us in praying that this procedure is easy and smooth and does indeed heal her so we can hear her sweet voice back to normal again!

Miriam is now three weeks post-surgery, and doing great. She still has scabs from the major incisions, but the new skin that is forming is pink and healthy. Her energy level is nearly back to where it was before surgery. She has made lots of trips out of the house, including even some very active visits to the playground! One of her favorite outings was to the Mardi Gras party hosted by Regina Mater, a Catholic home school cooperative very dear to the hearts of Miriam’s grandmother and Godmother (and a source of powerful prayers during her surgery!). We wanted to share a few photos from the party with you to show how well Miriam was feeling just two weeks after surgery. 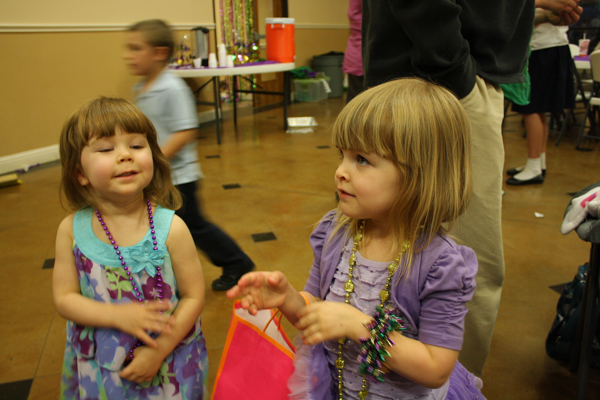 Checking out her new beads 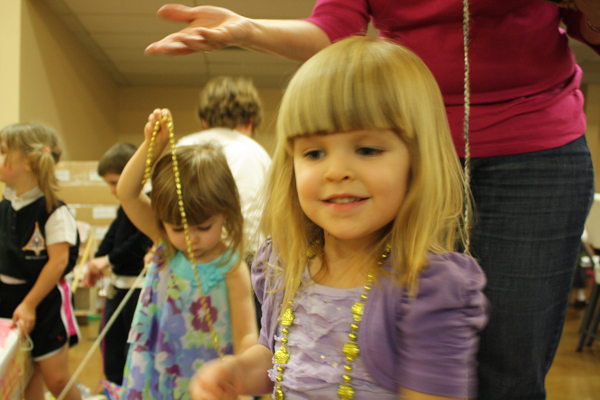 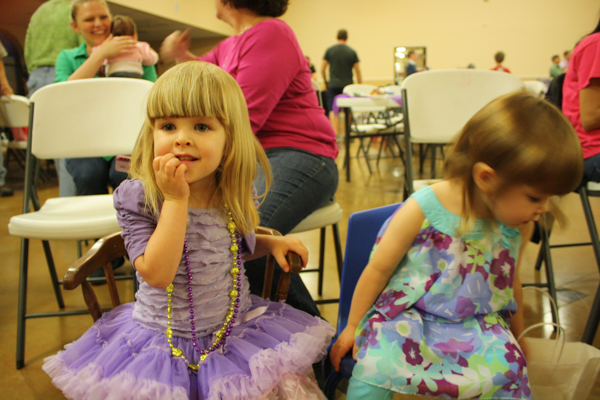 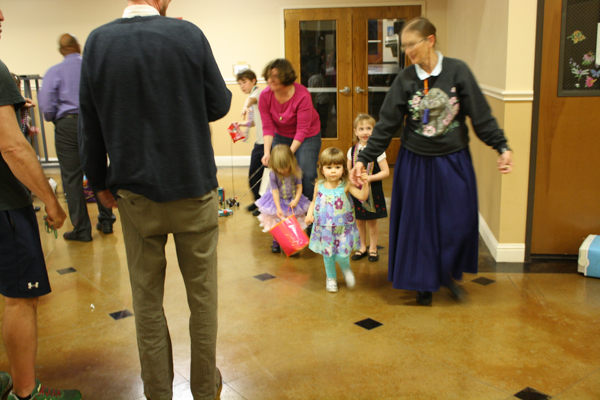 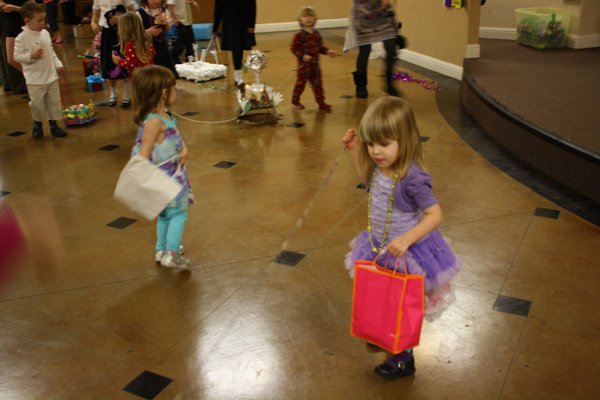 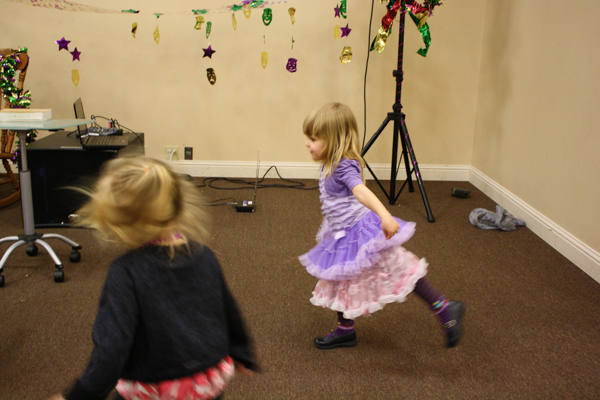 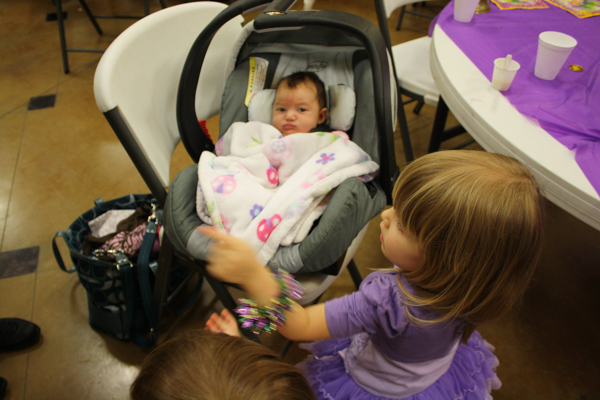 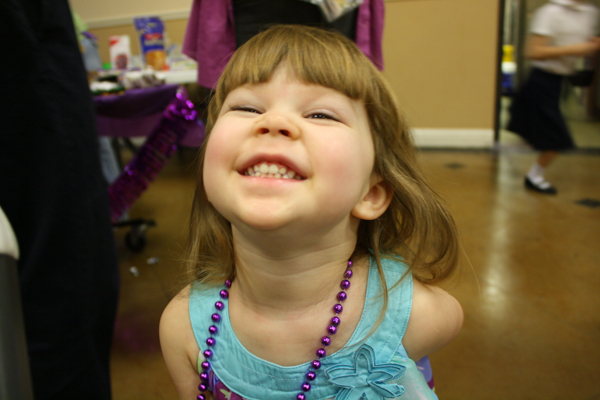 Cecilia had fun, too.

She is getting stronger every day! Thank you for your continued prayers!

Miriam went to visit Dr. Williams today to check on her recovery. They took another X-ray, which showed that all of the fluid that had collected in her chest cavity is gone. Dr. Williams also estimated that the angle in her back caused by her scoliosis has dropped from above 45 degrees pre-surgery to about 7 degrees now. All of her bandages are off, except for a small band-aid covering the scab left from her chest tube. She can resume taking showers and playing as much as she has the energy to do.

She has been weaning off pain medication, but still needs some here and there to cope with her soreness. She is still cautious about climbing in and out of chairs and bending down, but overall is moving much more freely than a week ago. Her devices make some visible lumps in her back, and there is one prominent lump on her front where the rib that moved the most in the adjustment has pushed forward. Dr. Williams is sure these cosmetic issues will diminish as her body grows. She is still tiny (only 36 inches)!

We will return for another follow-up in six weeks, and he anticipates her first expansion will take place in August. Overall he is very happy with the success of the surgery and with how well she has recovered. We are very grateful for these things, too!

Miriam continues to get cards and packages almost every day. Thank you so much to all of you who have sent her something! She and her sisters know they are loved by friends all over the country and the world (and so do we)!

Miriam should be headed home this afternoon! She had a rough night with Daddy (Mommy went home to sleep for a few hours), but we think they have her pain meds worked out now so hopefully we can avoid another night like that. She is sleeping deeply now, and once she wakes up we have asked physical therapy to come and get her up and moving. With the chest tube in, moving was uncomfortable, so we’re hoping now that it’s out and she is rested that she will be ready to play! Once we see she is able to get around on her own we will be discharged and get out of here!

She’s awake! While we wait we open one more package and do some coloring. Thanks, Great-Grandpa Dave and Great-Grandma Sally! 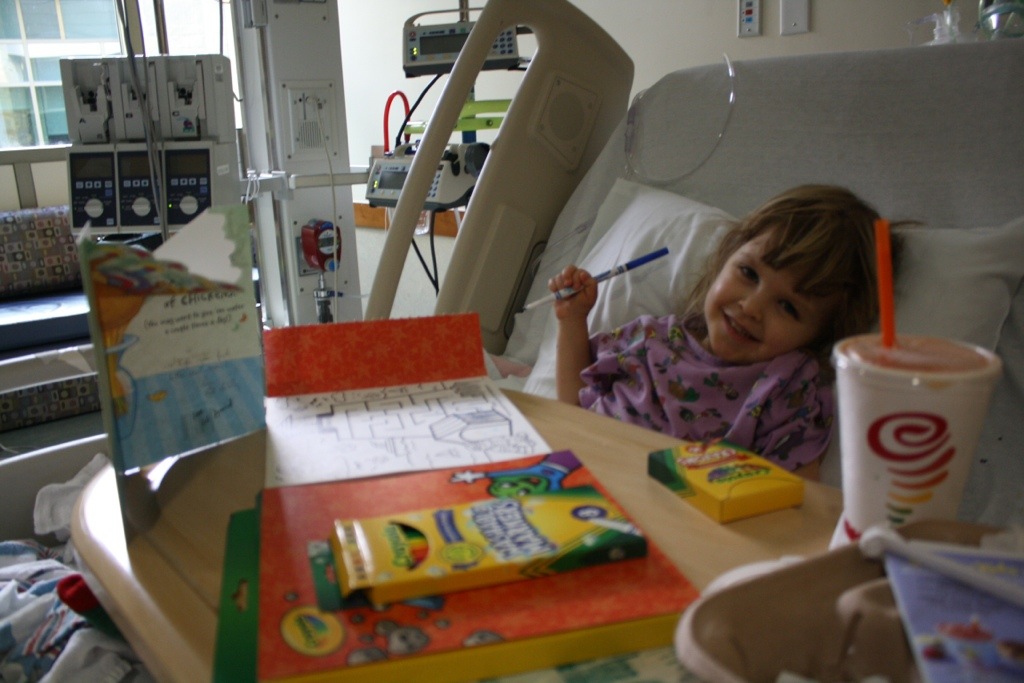 Mr. Doug from physical therapy arrived and helped Miriam take her first walk around the hospital. She made it down the PICU hallway and all the way out to the courtyard by herself (with the help of her magic wand)! 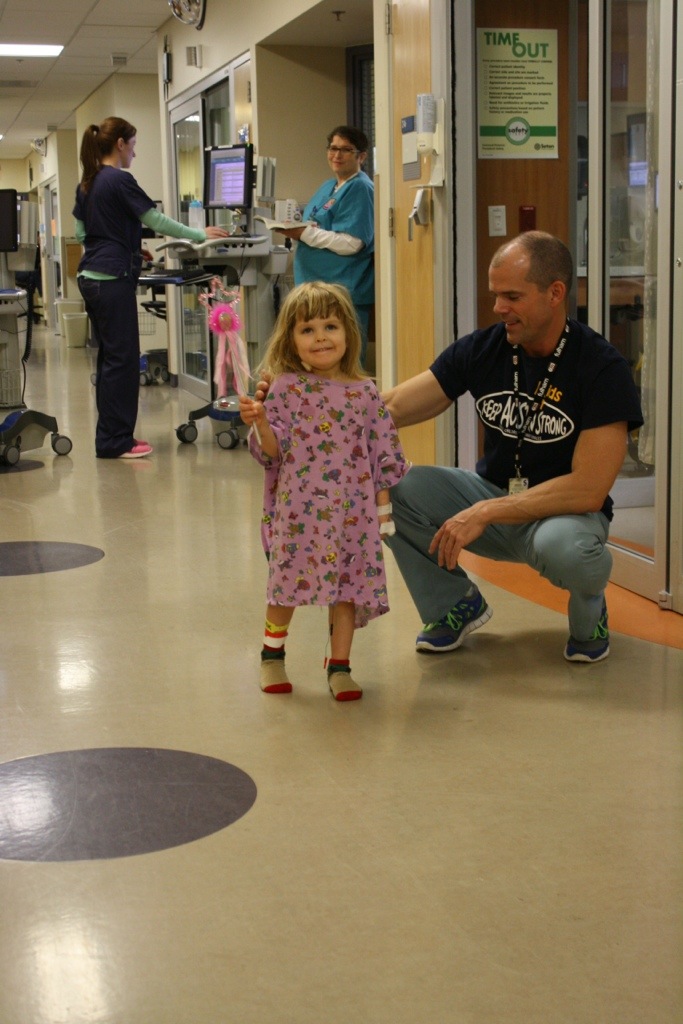 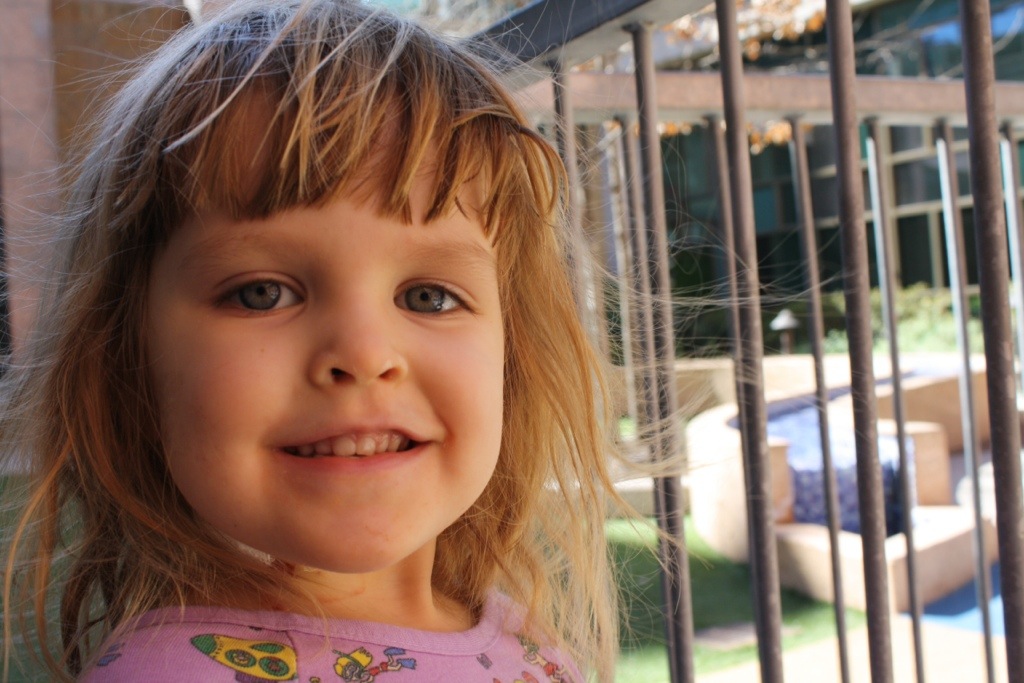 Cecilia and Grandpa came to help Miriam get moving. Cecilia was so happy to be with Miriam (and see all the fun presents she got)! 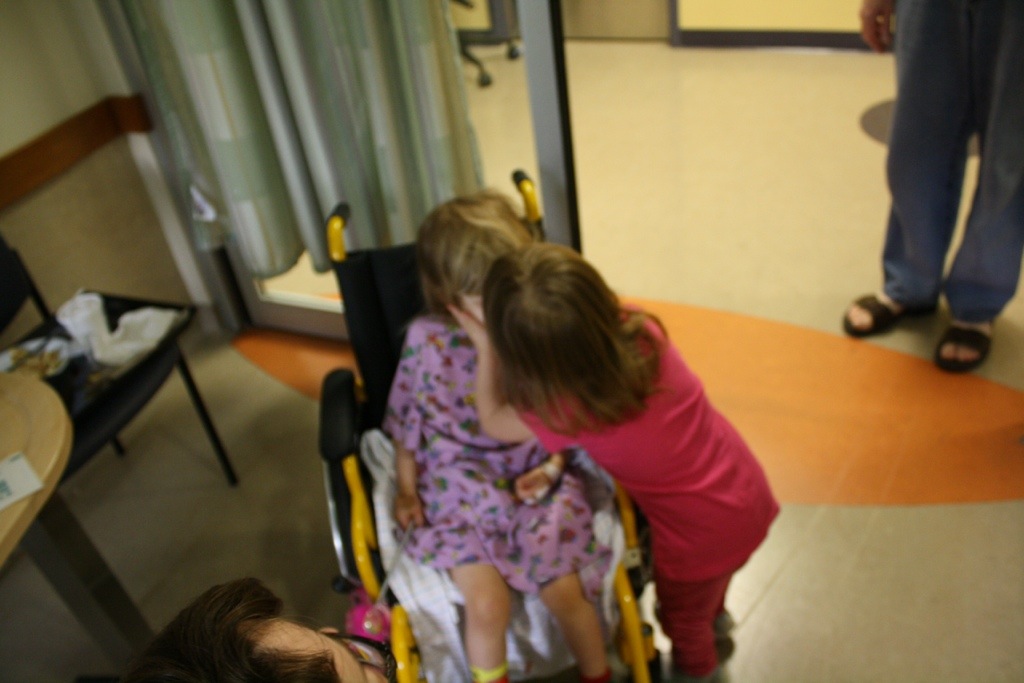 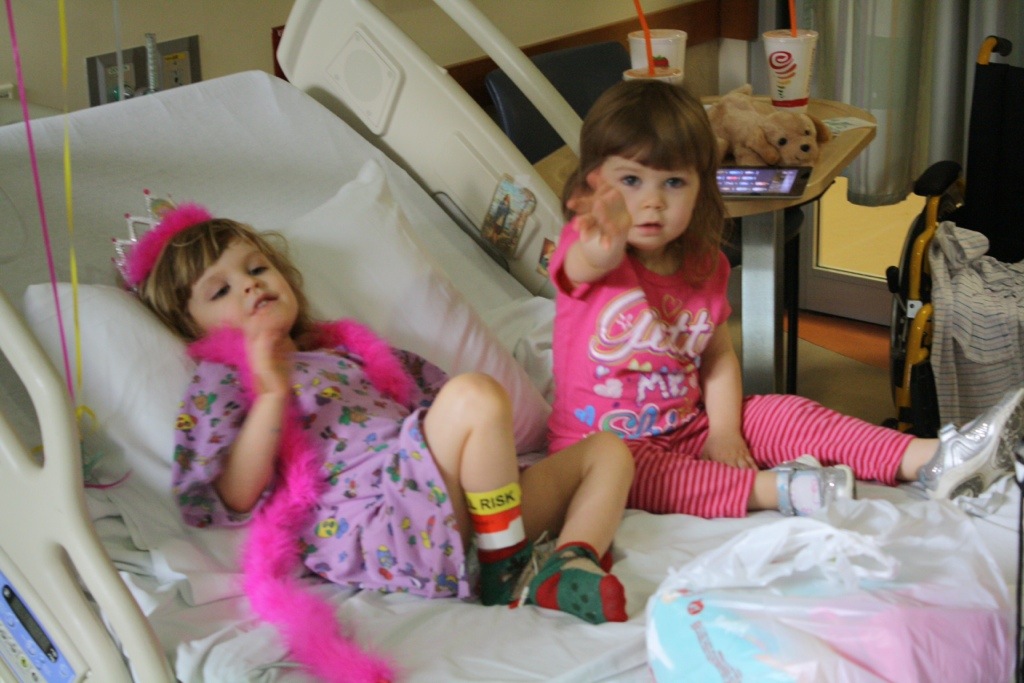 As soon as we were dismissed, Miriam got into her new princess fairy regalia thanks to Grandma’s cousin Patti and Mommy’s friends Becca and Jason. 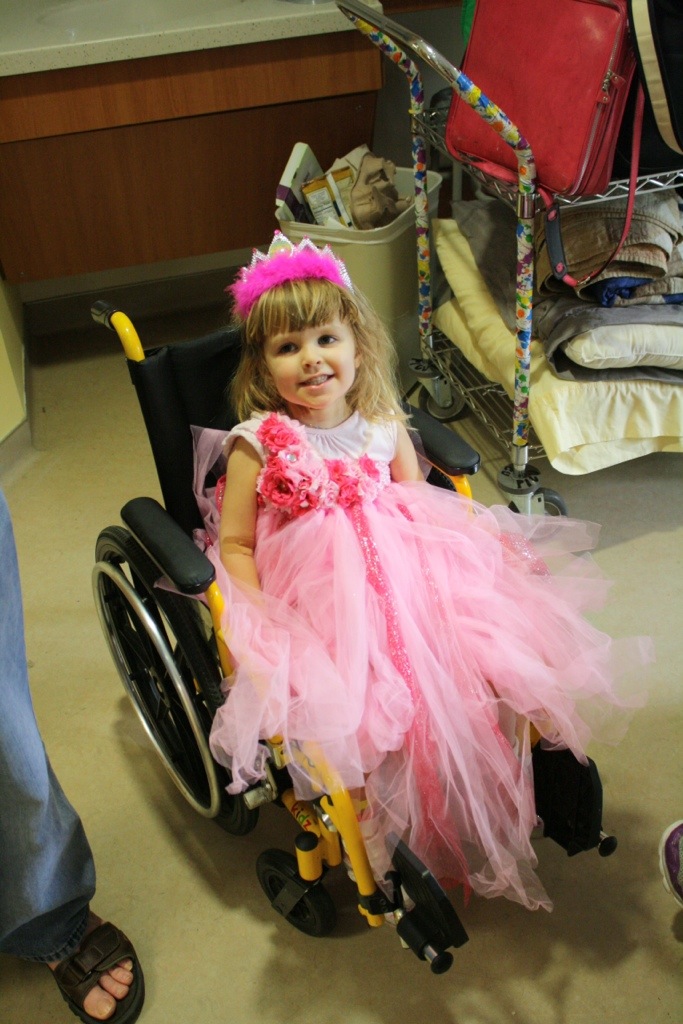 We stopped in the chapel for some grateful prayers of thanks, and then headed to the playroom, where the girls took care of dolls and did some imaginary shopping (and parents forgot to take pictures). 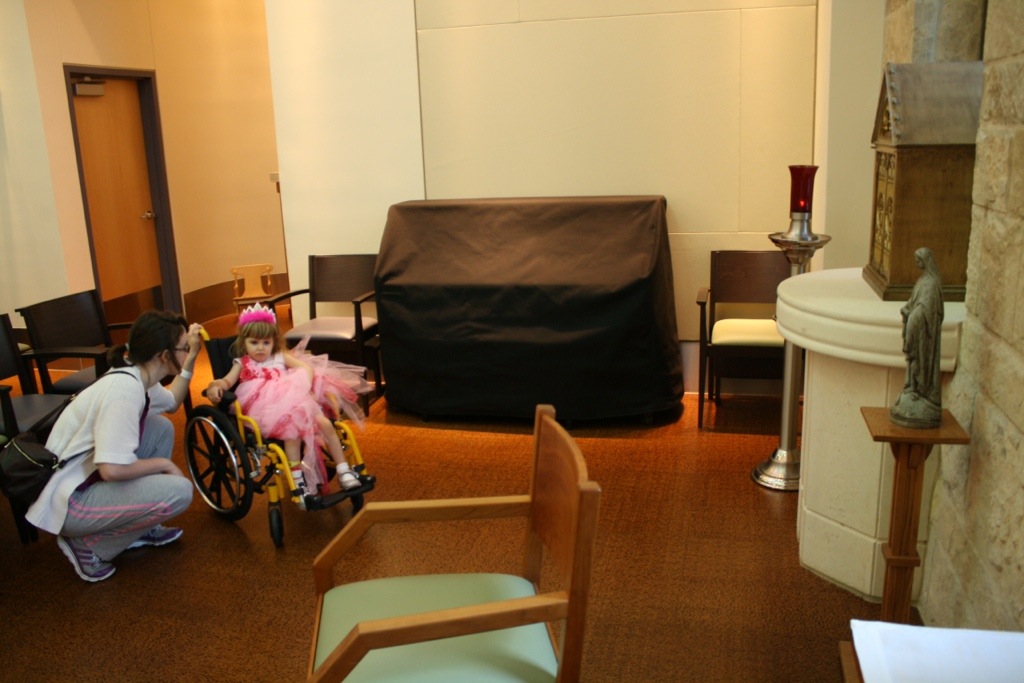 And now we’re home! Miriam has done well so far. She has climbed on and off her bed and the couch, and done some reading and coloring. She is in noticeable pain if her medication starts to wear off, but is quickly back to herself when she gets another dose. Hopefully she will wean off over the next week.

Thank you all again for walking this journey with us. We are so grateful for all of your prayers, as we know they have protected and strengthened her and us through the trials of this week. Please continue to pray for her recovery, and we will continue to update you. She is adjusting to a body with new proportions and healing some major incisions, so your support is still a gift. She will be having her first expansion of the VEPTR devices sometime this summer, but that should take only one or two days it the hospital (and will have a much easier recovery).

Can’t believe it is already Friday! 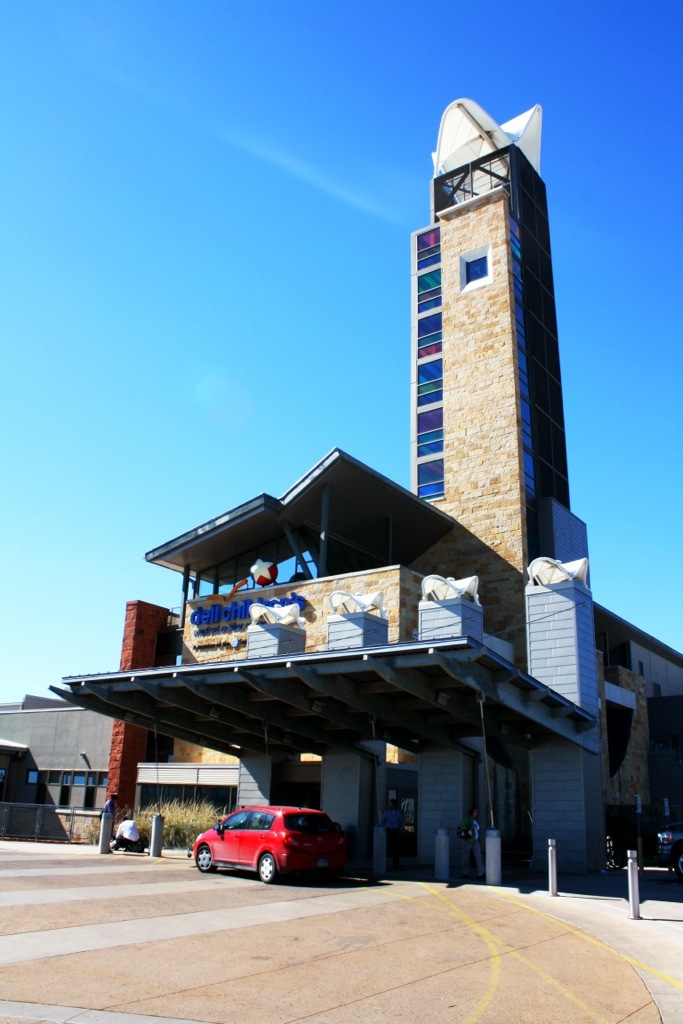 Miriam had a very restful night last night. And so did mommy and daddy. Daddy slept at home for ~6 hours while mommy slept with Miso and had the most sleep yet. (She slept a little at home the previous night and got to spend time with Hildi and Cecilia). 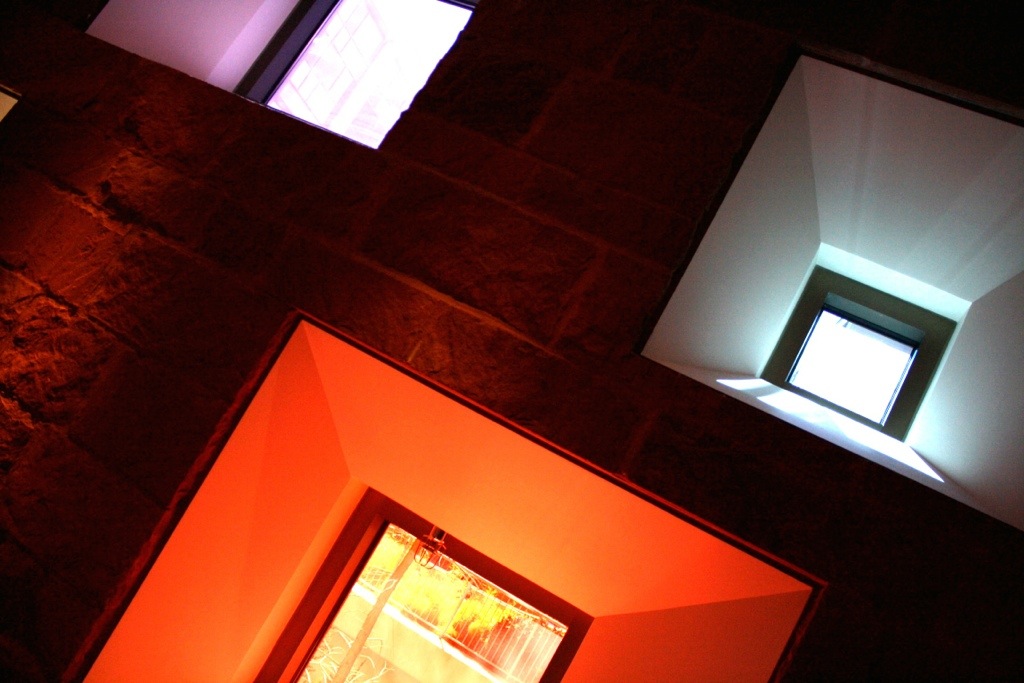 She had an early morning X-ray before both doctors visited. They and the radiologists were very happy with the progress on the chest tube. It is now off suction and if that goes well the plan is to remove it after lunch! Then she will move out of the ICU to a new room, and Dr Williams thinks she can go home as soon as tomorrow! We thought we still had a few days left.

We spent the morning with Pappateaux before he had to go to the airport to fly back to New York. They drew some pictures together. 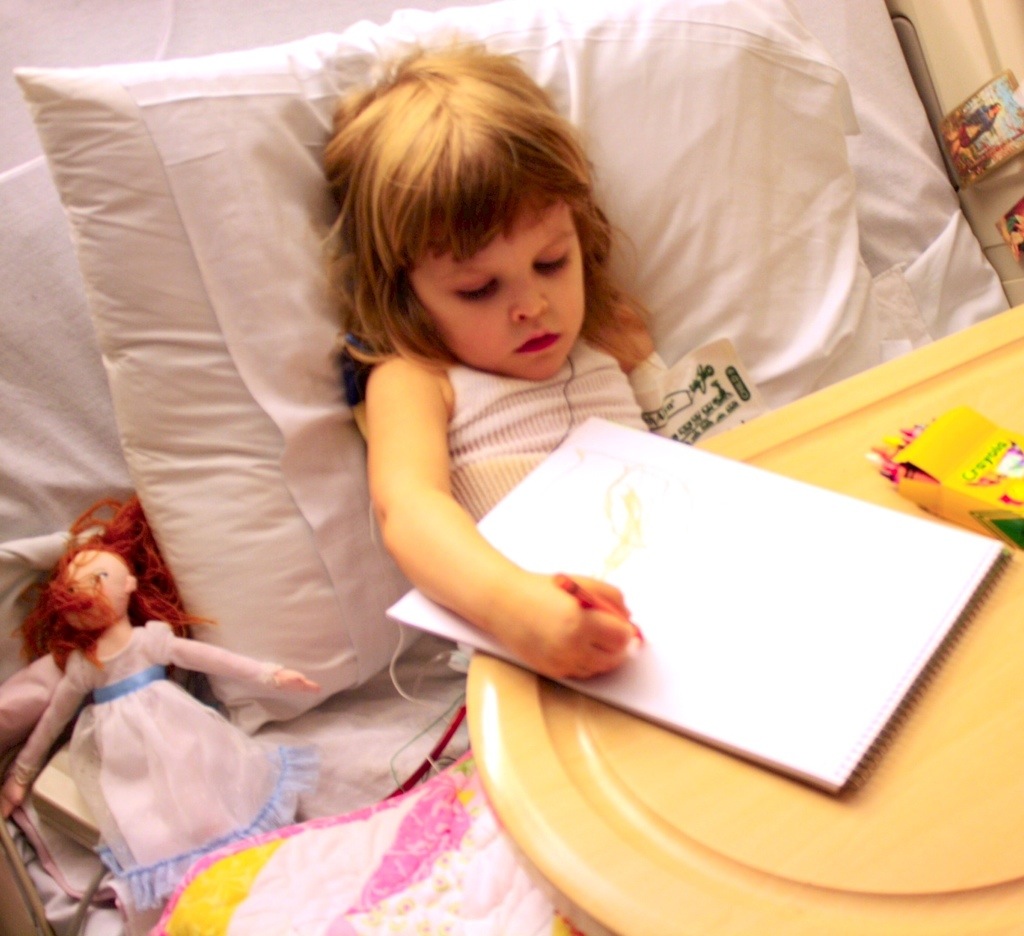 She continued to perk up all day, and napped often. First she asked for Daddy to nap with her: 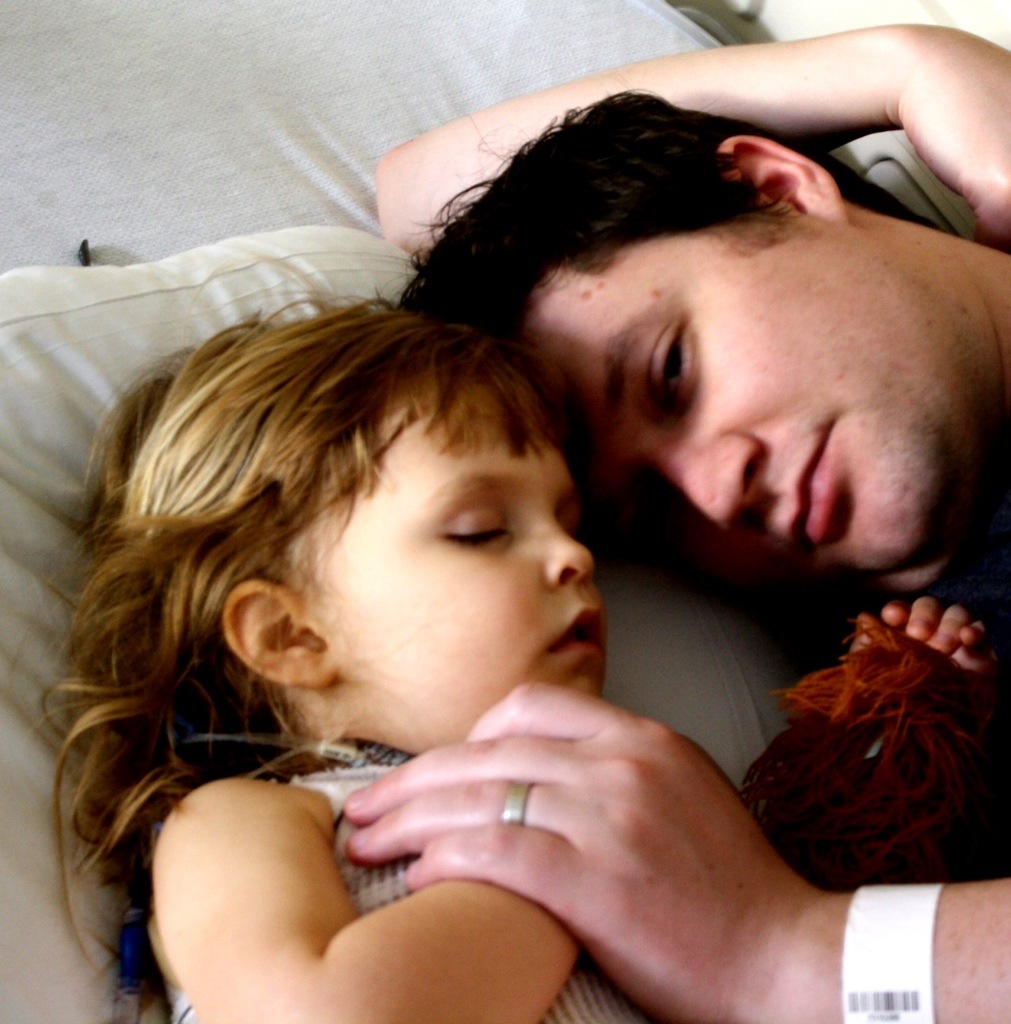 And later she wanted her Mommy: 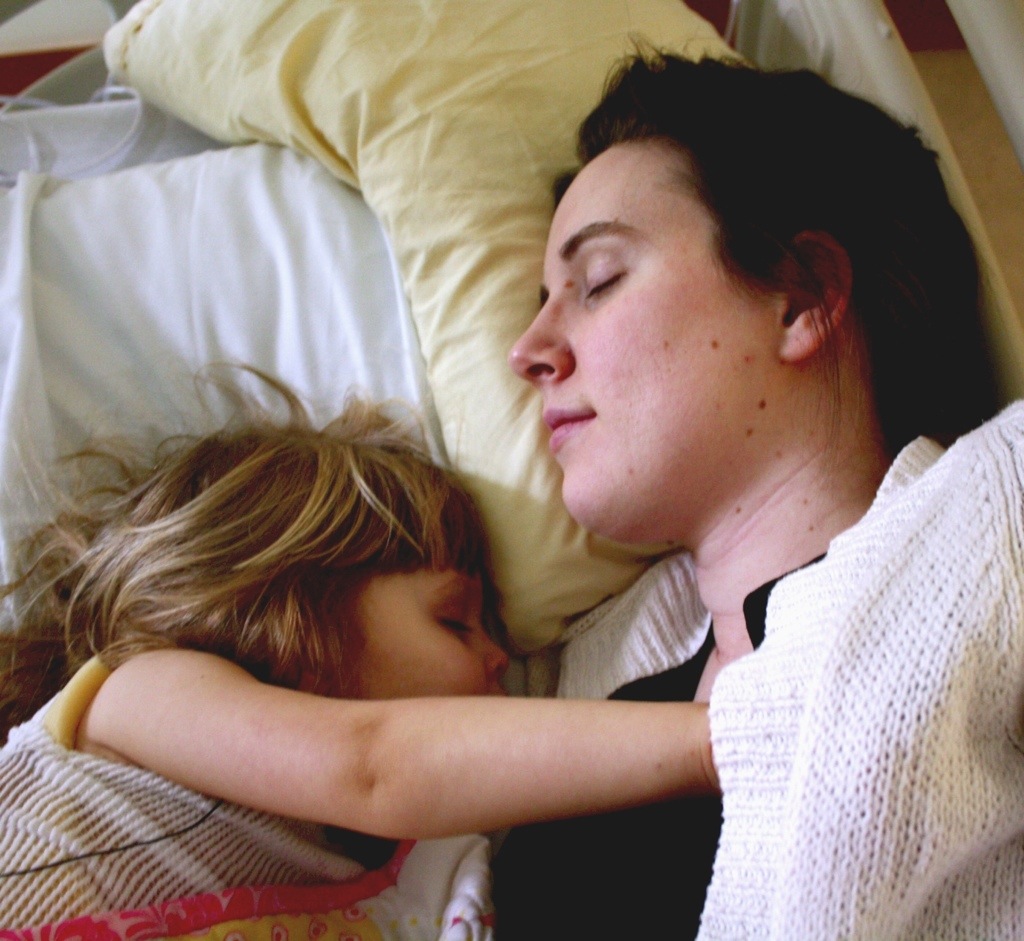 We got to video chat with Aunt Bekah and Kate! Kate showed us her Sleeping Beauty ballet, which was remarkable for not featuring any sleeping for all the beauty. 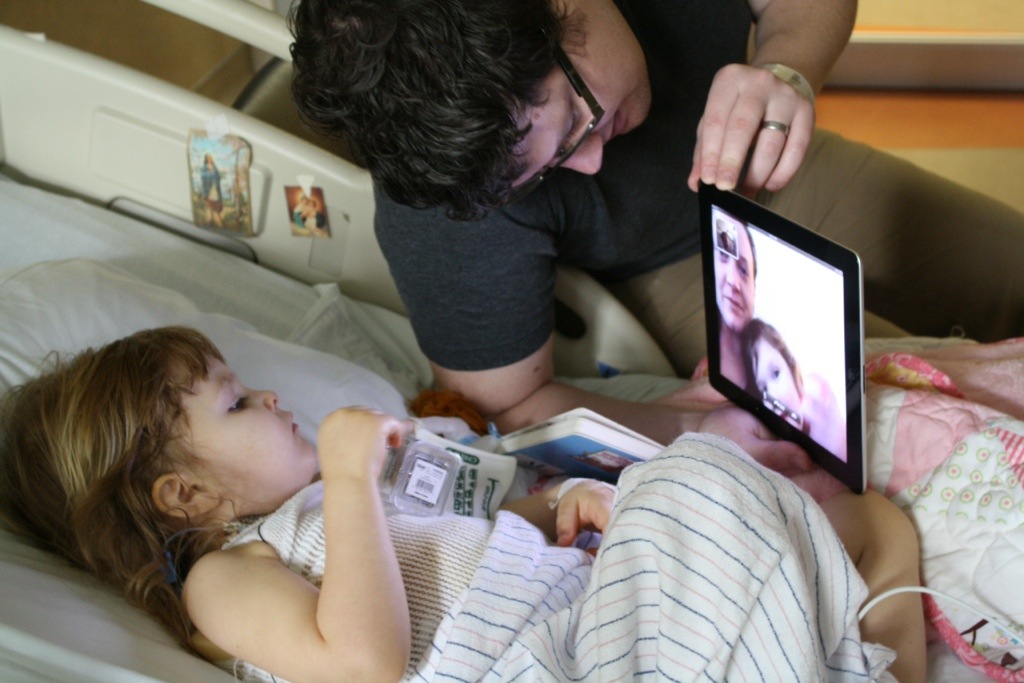 In the late afternoon they began to get ready to remove her chest tube. Another X-ray showed further progress in the draining, and the cavity sealed nicely. So the surgeon removed the tube and her “pain ball” (a small local anesthesia which had been washing over her incision area). Then came time to remove the central line in her neck. Even though this should have been the easy part, it ended up a little more tricky…

Miriam did not like the nurse pulling on the stitches and the mounting holding the tube in place. Plus she really needed to poop, had just had the tubes removed, and was getting pretty tired in general. So she cried quite a bit. With all the distress, the site where the chest tube had been began to fill up the bandage. There were some tense moments while we finished removing the stitches in her neck and tending to the wound (which was not expected to bleed).

We got the bandage changed, the surgeon and trauma PA came back to take a look, change the bandage again and get a chest x-ray to double check the inside. It looks like the chest tube had been blocking a bit more of fluids and blood from the procedure that had not yet drained (part of why they flushed the anti-clotting fluids in yesterday), and her motion/crying/coughing loosened it enough to drain. The chest x-ray showed that there was indeed less fluid and, more importantly, no air in the cavity. There was also no indication that there was any bleeding or injury internally (confirming the assumption based on the color of the fluids).

So we had a few traumatic hours there, but she is doing really well now. We’re remaining in the ICU for tonight as a precaution for monitoring, but after a few hours of checking, everyone is still thinking she could go home tomorrow. We’re definitely not anxious to leave. We would rather Miriam have a better memory of the hospital as her last experience, and we want to make sure she has sufficient movement, strength, mobility, and independence before we leave.

But speaking of… after all of that (and after dinner), Miriam said she needed to go potty and walked to the potty (with Daddy just holding her hands) and .. um … was … let’s just say very successful. Very. But that is very good news. She has felt much better since and is playing and talking now, even though she knows she needs to go to sleep.

I have a feeling she’s going to be very playful tomorrow. We’ll visit the healing courtyard (below) and the playroom, and maybe Cecilia and Hildi will join us. Mommy is going home to sleep and Daddy and Miso are ready to rest too. 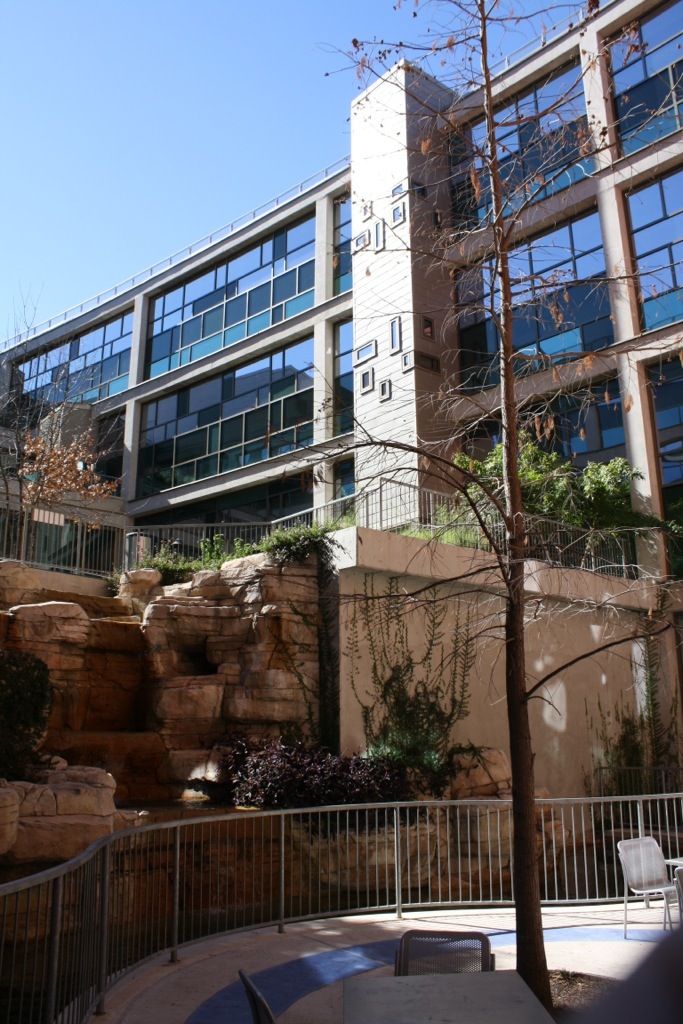